IRS Mileage Rate for the Second Half of 2022

The IRS just announced an increase in the standard mileage rate for the final six months of 2022.

The rate for medical and moving will also increase four cents per mile from 18 cents to 22 cents.

The IRS stated that the adjustments are necessary to better reflect recent increases in fuel prices.

How Do I Find My Cognizant DCAA Office?

This is a repost from a few years back but it also contains an updated link.

If you ever need to find the location of your nearest (or cognizant) Defense Contract Audit Agency office, click here and enter your CAGE Code, your DUNS number or your ZIP code.

Posted by Paul D. Cederwall at 5:39 PM No comments:

Posted by Paul D. Cederwall at 9:33 AM No comments:

Yesterday, we published the recently announced contractor compensation cap for calendar year 2022. Here is a listing of the caps since the cost principles were amended to apply to all employees on contracts awarded after June 24, 2014.

Prior to that date, compensation caps applied variously to 'top five employees in management positions', and 'all employees', depending on the year and whether the contract was awarded by DoD/NASA or a civilian agency. Also, compensation caps back then were much higher, peaking at $1.1 million in 2014. If you still have contracts awarded prior to June 24, 2014, you should become very familiar with FAR 31.205-6(p). 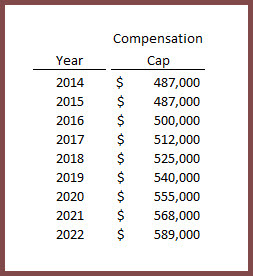 Posted by Paul D. Cederwall at 6:00 AM No comments:

The Office of Federal Procurement Policy (OFPP) recently published the contractor compensation cap amount for 2022. The cap, for costs incurred between January 1 and December 31, 2022 is $589,000 and applies to all employees on contracts awarded after June 24, 2014.
As a reminder, 'compensation' in this context includes wages, salary, bonuses, deferred compensation, and employer contributions to defined contribution pension plans (see FAR 31.205-6(p)(1)(i)).
Posted by Paul D. Cederwall at 3:28 PM No comments:

Costs Incurred During a Strike Period

FAR (Federal Acquisition Regulations) does not provide specific guidance with respect to the allowability of costs during strike periods.

FAR 22.101-1(b) requires that Governmental Agencies (e.g. DCMA and DCAA) remain impartial concerning any dispute between labor and contractor management and not undertake the conciliation, mediation, or arbitration of a labor dispute. Later provisions in the same FAR section, contracting officers are instructed, in the event that labor disputes give rise to work stoppage, to impress upon contractors that they shall be held accountable for reasonably avoidable delays. Further, all costs incurred during strikes will be carefully examined to ensure recognition of only those costs necessary for performing the contract in accordance with the Government's "essential interest".

Despite its stated neutrality in resolving labor disputes, the Government will be anything but neutral when in comes to paying for strike related costs. Costs directly attributable to the strike, which would not have been incurred otherwise, such as extra security guards, special legal expense, arbitration costs, etc. will all come under close scrutiny and may not be fully reimbursable (even as an indirect expense). Costs which are abnormally higher during the strike period, such as recruitment, training of new employees, etc is another category that will get a lot of attention by contract auditors. Remember, contractors have an affirmative duty to mitigate all strike-related costs.

Costs of a continuing nature will be evaluated based on a number of factors including reasonableness, the extent to which subsequent production makeup operations were undertaken to maintain production schedule, the actions taken to minimize costs during the period and any other factors that have a bearing on the expeditious settlement of the labor dispute.

Sometimes the Government will insist that a contractor accumulate strike related costs and allocate them over the period of the resulting collective bargaining agreement. For example, if the collective bargaining agreement is three years, strike related costs would be accumulated and allocated over production for the next three years.
Posted by Paul D. Cederwall at 10:44 AM No comments: