This weekend, representatives from Pacific Northwest Consultants will be participating in the National Oceanic and Atmospheric Administration's dedication cermony for the opening of its new Marine Operations Center for its Pacific Fleet in Newport Oregon. The Port of Newport won the competition for the operations center against several other west coast cities. PNWC was instrumental in preparing and supporting Newport's winning bid.

"The project was accomplished early and under budget," said Ginny Goblirsch, president of the Port of Newport Board of Commissioners. "NOAA is thrilled with it and so are we. It's a beautiful facility".

Congratulations to NOAA, the Port of Newport, and the City of Newport. 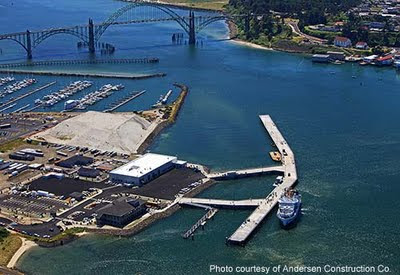 Click here to read a news account of the event.﻿
Posted by Paul D. Cederwall at 7:57 AM