This section of the FAR cost principle on compensation addresses statutory limitations on the overall compensation for certain contractor personnel. These compensation caps have been around since 1995. Initially, they applied to DoD contracts only but starting in 1998, the caps were extended to all Government contracts. 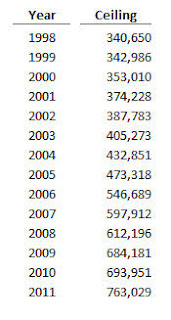 Compensation, as defined under this cap includes only wages, salaries, bonuses, deferred compensation and employer contributions to a defined contribution pension plan. It does not include other elements of compensation such as severance pay, early retirement incentive pay, etc.

Since 1999, the cap applies to the five most highly compensated employees in management positions at each home office and each segment of the contractor, whether or not the home office or segment reports directly to the contractor's headquarters.

Beginning in 2012, the cap was extended to all employees under DoD, NASA, and Coast Guard contracts (see Section 803 of the 2012 NDAA).