We've been working our way through what is commonly referred to as the CAS Working Group Guidance. Between 1975 and 1981, DoD convened a group of CAS "experts" to come up with practical solutions to some issues that contracting officers were facing in trying to interpret and apply the rules and regulations being promulgated by the CAS board during that time. During that time, the Working Group published a total of 25 "interim" guidance papers. According to DoD, twenty of the 25 are still current. Today we will be discussing Working Group Guidance # 76-9, Measurement of Cost Impact on FFP Contracts. Significance of "Effective" and "Applicability" Dates included in CAS. To read previous installments in this series, go to the "Labels" section on this page and select "CAS Working Group". 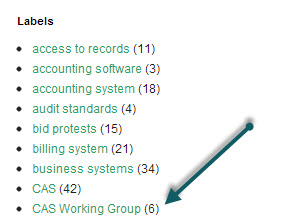 CAS has several provisions regarding accounting changes and noncompliances. CAS requires an equitable adjustment whenever accounting system changes result from the issuance of new cost accounting standards. CAS requires that the Government and contractors negotiate the terms and conditions under which a voluntary change to either a disclosed or established cost accounting practice will be made. CAS also provides for recovery with interest of any over payments that have resulted from a contractor's failure to comply with either a CAS Standard or a disclosed practice. CAS does not however, address the mechanics of these computations.

Although there is a certain theoretical purity to the use of original cost estimates for adjusting fixed price contracts for mandatory and voluntary changes, there are several serious impediments to that approach that are intrinsic to fixed price contracting. While the parties to a fixed contract have agreed to a total price, there is often no agreement as to how much of the price represents cost and how much profit and seldom a meeting of the minds on the amount of any individual element of costs. This will be particularly so if the award was based on adequate price competition. Further, many fixed price contracts will have undergone numerous price changes due to engineering modifications and other changes. In such cases, tracking of an individual cost element may prove virtually impossible. There is also the danger that the confusion resulting from the attempt to reconstruct the original data will provide an opportunity to reprice loss portions of contract performance that have elapsed prior to the point of the change.

To overcome these issues, the  Working Group issued the following guidance.


Cost adjustments under either mandatory or voluntary changes should generally be the net difference between the current estimated cost to complete using the old accounting methods and the same estimate reconstructed to reflect the new methods.