Prohibition on Contracting with Delinquent Taxpayers and Felons

Last December, the FAR Councils published an interim rule that prohibits the Federal Government from entering into a contract with any corporation having a delinquent Federal tax liability or a felony conviction under any Federal law, unless the agency has considered suspension or debarment of the corporation and has made a determination that this further action is not necessary to protect the interests of the Government. This prohibition was required to implement sections of the Consolidated and Further Continuing Appropriations Act of 2015.

Yesterday, the FAR Councils made the interim rule permanent, without change, even though there were a few public comments that opposed, objected, or raised concerns with aspects of the interim and now, final, rule. For example, someone noted that the FAR already includes Federal tax delinquency and criminal malfeasance as causes for debarment so a new (similar) rule is unnecessary. Be that as it may, the Councils' response was a reference back to the underlying statute that made the regulation necessary.

Corporations are now required to self-certify in the SAM (System for Award Management) "Representations and Certifications" section that it has no delinquent taxes or has been convicted for a felony criminal violation with the preceding 24 months. The precise wording follows: 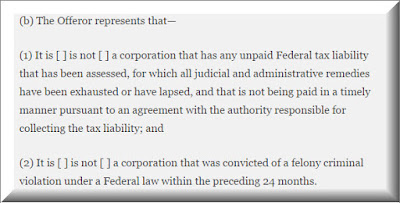 The new regulation contains no provisions for false certifications. Presumably that would result in a terminated contract and debarment or suspension thereafter.

This new rule should not have much of an impact as DoD and many other agencies have already implemented similar provisions in their FAR supplements.