In our last two postings, we discussed last Friday's regulation dump where the FAR regulators presented us with a fiscal year-end gift. On Friday we discussed the prohibition against awarding contracts to companies with delinquent taxes or felony convictions. Yesterday we discussed the prohibition against retaliating against employees who share their compensation informtaion with one another. Today we take up the new regulation on contractor employee compensation caps.

The new rule follows an interim rule from June 2014 that implements a provision in the Bipartisan Budget Act of 2013 that significantly reduces employees compensation that contractors and subcontractors can claim on Government contracts. Compensation is capped on contracts awarded after June 24, 2014 to $487 thousand. Under the previous method for computing compensation caps, the maximum would have been (and still is for contracts awarded prior to that date) $1,144,888 for 2014 and lower amounts for earlier years. To view compensation caps by year under the old methodology, click here.

The final rule doesn't make any substantial changes to the interim rule. It adds the following table to help sort out which compensation caps apply to which agencies and which category of employees. 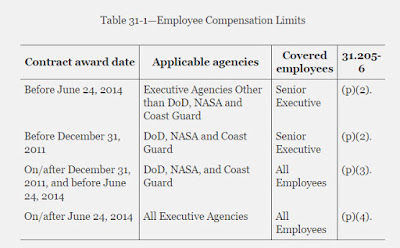 The new rules provide an exception to the limitations. An agency head may establish one or more narrowly targeted exceptions for scientists, engineers, or other specialists upon a determination that such exceptions are needed to ensure that the executive agency has continued access to needed skills and capabilities. Those determinations must take into account the amount of taxpayer funded compensation to be received by each employee and the duties and services performed by each employee. We are not aware of any requests for exemptions however that is not to say that there may have been some. It seems to us the an Agency head would be reluctant to approve such requests without compelling evidence that it was necessary to attract and retain qualified employees. After all, $487 thousand is still pretty high compensation for scientists and engineers.