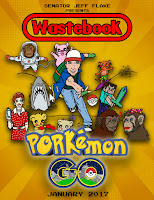 It seems like U.S. Senators are competing to see who can identify the most wasteful Government spending. Last November, Oklahoma Sen. Lankford issued his second annual edition of Federal Fumbles wherein he chronicles 100 examples of wasteful, or at least questionable federal spending. Then last month, Arizona Sen John McCain issued a similar publication entitled America's Most Wasted - Time to Arrest America's Out-of-Control Spending. Now, Arizona Sen Jeff Flake has published his own listing of 50 examples (worth more than $5 billion) in wasteful Government spending. This latest publication is entitled PORKemon Go, named after the popular mobile app Pokemon Go. Three exposes in three months is a lot of waste.

In this latest "wastebook", the "science" agencies (like National Institute (NIH) of Health and the National Science Foundation (NSF)) figure prominently on the list but other agencies probably account for more of the wasted dollars. When the Government spends money either through contracting or outright grants, there are contractors or grantees benefiting from the largesse. If the Government ever gets serious about saving money, it will be contractors and grantees that are most affected. Here are a few of the report examples:


We think that the other 97 Senators better get picking before the low-hanging fruit is gone.

Email ThisBlogThis!Share to TwitterShare to FacebookShare to Pinterest
Labels: waste