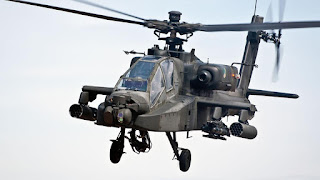 According the Justice Department press release, the company, Prototype Engineering and Manufacturing, Inc. (PEMI) had a contract to overhaul and repair linear actuators that were used on the Army's AH-54-A Apache helicopters. PEMI was not authorized to repair DC  motors used in the linear actuators unless it had received specific authorization from the Army.

According to the plea agreement, PEMI used an outside contractor to repair 105 DC motors when those repairs had not been authorized by the Army. Those repaired motors were then installed into overhauled linear actuators which were, in turn, delivered back to the Army.

As a result of the fraudulent conduct, the company received more than $320 thousand in improper payments.

That is not the only thing this contractor (and by extension, its owner) did. He also pleaded guilty to aiding and abetting in the filing of a false tax return related to an employee's tax return. He paid the employee $100,000 but told the employee the amount was a gift which prompted the employee to not report the money as income of a federal tax return.

In another case, this same owner agreed to pay more than $900 thousand after the Government determined that he had caused his company, PEMI, to submit false claims to the Army. The investigation found that , in addition to improperly installing repaired DC motors, PEMI also installed cheaper replicas of a jacket-and-nut assembly component, rather than purchasing that component from the original manufacturer.

As a result of all of these actions, the contractor will no longer be able to solicit, accept or perform any federal Government or military contract. Look for a going out of business sign soon.