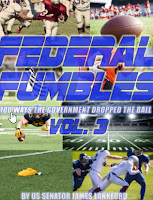 Oklahoma Senator James Lankford just released "Federal Fumbles Vol  3, One Hundred Ways the Government Dropped the Ball". This represents his third annual edition of this football themed publication. You can read our coverage of Volumes 1 and 2 by clicking here for the 2015 version and here for the 2016 edition. To download all three editions, visit Senator Lankford's dedicated webpage..

The latest publication documents 100 new examples of wasteful, duplicative, and inefficient use of tax dollars. Many, perhaps most of the examples are rooted in wasteful contracts and grants because those are the mechanisms for spending Government funds. But as in past years, Lankford is not necessarily calling out Government contractors and grantees for wasteful spending, the root problem lies in the layers of Congress and bureaucracy making the decisions that certain things would be a wise use of taxpayer funds. Many of the 100 fumbles boarder on the humorous and would be if it weren't for the realization that these are monies that could be spent on real needs of the country.

Here are just a few examples of what you can find in this report.


Senator Lankford say's that he is hopeful that Agencies be forced to make more responsible decisions. We don't know if that will ever happen but the report does make some fun reading. Print out a copy and put it where you keep your copy of "Chicken Soup for the Soul".

Email ThisBlogThis!Share to TwitterShare to FacebookShare to Pinterest
Labels: fraud waste and abuse