Back on August 24th, we reported a proposed rule by the Defense Department that would significantly slash the progress payment rate from 80 to 50 percent unless contractors were able to achieve certain milestones such as contract delivery, no significant corrective action requests, no significant business system deficiencies, meeting subcontracting goals, among others (see Proposed Changes to Progress Payment Rate).

Two weeks ago, we reported on a scheduled public meeting to obtain the views of experts and interested parties regarding the proposed changes (see Proposed Changes to Progress Payment Rate - Public Meeting Scheduled). We reported then that this proposed change has been meeting with a lot of concern and resistance. The Defense Department has valid concerns. Many contractors do not seem to care about improving their business systems, meeting subcontracting goals, or acknowledging corrective action reports because there is no penalty for failing to comply. Defense is trying to incentivize contractors to do the right things by disrupting their cash flows if they don't toe the line.

Well, contractors seem to have won this battle. Today, the Defense Department withdrew the proposed rule and cancelled the public meeting (see Performance-Based Payments and Progress Payments (DFARS Case 2017-D019)). According to DoD, the proposed rule was withdrawn in order for DoD to conduct additional outreach with industry regarding contract financing methods.

This isn't the end of the story however. The proposed rule was based on a provision in the FY 2017 NDAA (National Defense Authorization Act) so eventually, there will be some kind of change to existing policy. 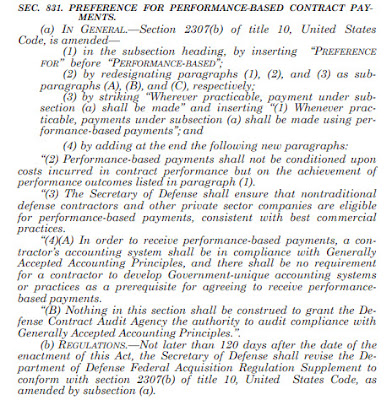