The SBA (Small Business Administration) announced yesterday that the Federal Government achieved its small business contracting goals for the sixth consecutive year. The Federal Government overall, awarded more than 25 percent of Federal contract dollars to small businesses. This percentage equates to about $121 billion or about $15 billion more than fiscal year 2017.

Comparing fiscal year 2018 performance with that of 2017, awards to small businesses were up in all categories. The only category where the Federal Government fell short of its goal was awards to Women Owned Small Businesses. So there's an opportunity there for women-owned small businesses.

Here is a summary of achievements by category: 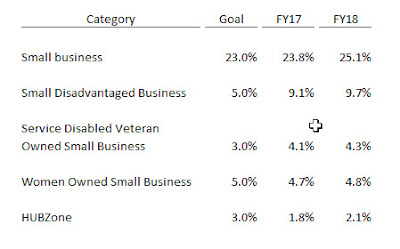