No Word Yet on Executive Compensation Cap for 2011

FAR (Federal Acquisition Regulations) 31.205-6(p) limits the compensation paid to the five most highly compensated employees in management positions at each contractor home office and each segment under a home office. Compensation in this context includes salaries, wages, bonuses, deferred compensation, and company contributions to pension plans. The compensation cap is determined each year by the Office of Federal Procurement Policy (OFPP), a department within the Office of Management and Budget (OMB).

The 2010 ceiling of $694 thousand was posted by OFPP way back in April 2010. OFPP (despite urging from Congress) has not yet posted the ceiling for 2011. Nothing in our research has told us why that is. Most likely, the delay is motivated by political considerations.

In the meantime, there has been a number of other proposals to cap compensation levels. A couple of weeks ago, three Senators introduced legislation to cap compensation at $400 thousand and extend the cap to all employees, not just the top five most highly compensated. A House version set the cap at $700 thousand but also extended it to all employees. Earlier, the Obama Administration proposed a $200 thousand cap for top executives (presumably the five most highly compensated individuals).

Not surprisingly, the AFGE (American Federation of Government Employees) support the lower thresholds while industry trade groups (such as the Professional Services Council) oppose any lowering of the caps.

Government contractors need to watch these developments very carefully. Lowered caps could significantly affect the amounts that contractors can claim under cost-type contracts. If a $200 thousand cap becomes the law, many contractors will find that they must refund money to the Government.

For your information and use, here are the compensation caps since 2004. 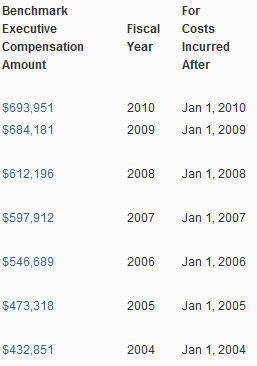